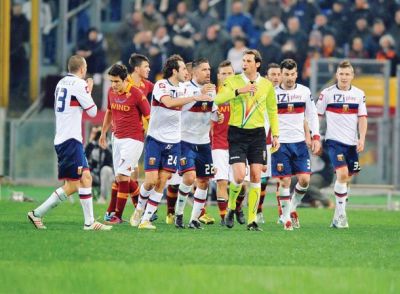 If you loose: never blame the referee, unless…. Like almost every year Genoa played a good match in Rome and deserved at least a draw, but referees are afraid in Rome if A.S. plays at home. Especially Totti knows this and his 225th goal in the Serie A was overshadowed with an accident in which he deserved a red card and not our Juraj Kucka. The referee who is “man enough” to give Totti a red card in Olimpico is not born yet, but the big question of his career remains: will we remember Totti as a great footballplayer (which he surely is) or more as a very irritating bad person ?  At the moment the last!

In the 16th minute Gervasoni gave Roma a penalty when De Rossi felt down himself in the penaltyarea. Totti scored the penalty which brought his total on 225 which makes him number 2 in the history of the Serie A. Just like in the old Roman Colloseum days the public got where it came for (the 225th goal of Totti) and Gervasoni arranged it. Just before halftime the referee had to give also Genoa a penalty when Borriello was fouled inside the penaltyarea. Our topscorer made the penalty himself: 1-1, halftime. Just as in the first half Genoa was the best team after the break but Dutch goalkeeper Maarten Stekelenburg played a very good match. Out of a corner Romagnoli scored 2-1 by surprise, which was the sign for Ballardini to play even more offensive and bring Jorquera and Immobile in the team. After first again Stekelenburg stopped Genoa a few times the final knock-out was made by Gervasoni who gave Kucka and Totti both a yellow card after a regular action of Kucka. The protest of Totti meant that our best player had to leave the pitch just as Ballardini a few minutes before when he walked 2 meters inside the field to ask his players to stop the game because of the injury of Roma-striker (!) Osvaldo. With 12 against 10 Perrotta scored the deciding 3-1 just before the end of the match. A big party in Olimpico with Totti and Gervasoni as the most popular persons. Friday against Milan we have to miss our best player Kucka, but Ballardini can be on the bench because he is not punished after his red card, which is very unusual in Italy. Hopefully the punishment goes to Gervasoni.