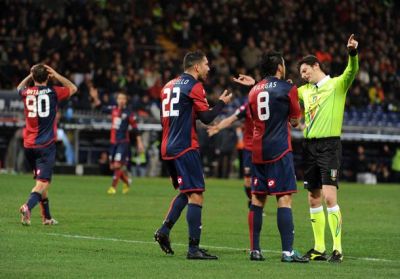 Genoa lost both matches, but we deserved more. Like Andreas Granqvist already told us during the handover of the trophy of Genoano of the year it’s easy to the big teams to have a penalty, but it is very difficult to get one against them. In Luigi Ferraris Milan made 2 clear handballs in the penaltyarea which even their ex-President Berlusconi (76 years old) admitted that he had seen them easily on tv. Also in the first half Granqvist was fouled when he wanted to score a header. Referee Damato refused to see it all, so Milan did win by 0-2 with goals of Pazzini and Balotelli. 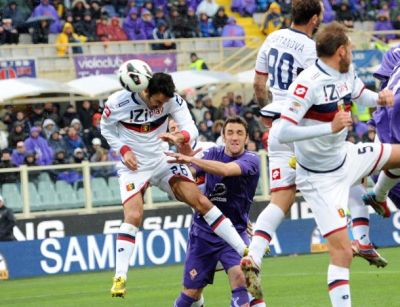 In the first half in Firenze Fiorentina was the best and only team in the field. They deserved at last 2 goals but only scored an irregular one when Aquilani first pushed Granqvist to the ground and then scored. After the break with Jankovic and Jorquera in the team Genoa played very strong and was equal to Fiorentina. We scored twice with Portanova and Antonelli, but also Fiorentina had 2 goals in the 2nd half: an error of our substitute goalkeeper Tzvoras who lost the ball that was in his both hands and an unlucky own goal of Cassani who got a corner on his sholder. Only Siena earned 1 point against Cagliari, while Palermo and Pescara lost their match, so we are still above the relegation-zone. Saturday 30th March we play the important match at home against Siena.