Balla did it ! After the defeat at home against Catania on 20th January Ballardini was hired by Mr. Preziosi. Genoa was on the 18th position in the standings with 17 points in 21 matches. The mission of Ballardini was easy: keep Genoa in Serie A. After the draws at home against Siena, Sampdoria and Atalanta everybody was afraid that Ballardini wouldn’t complete his mission. The match in Verona was the change with a 0-1 victory by a goal of Borriello. With this victory (the first since 17th February) the believe that we could stay in Serie A returned and was confirmed by the 4-1 win against Pescara that was relegated after this match. Because Siena and Palermo lost almost all their matches Genoa now is 1 playround before the end already safe. Mr. Ballardini did a terrific job! 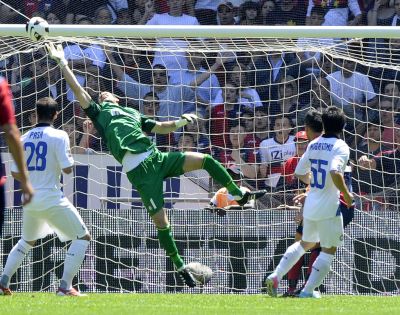 The match against Inter ended in a 0-0 draw and the remaining in Serie A because Fiorentina beat Palermo (1-0, Toni) and Siena lost in Catania (3-0). Genoa played a very good first half and was with Borriello (see foto) and Bertolacci a few times close to open the score. In the second half with Palermo already 1-0 down in their match in Florence Genoa was satisfied to keep the draw. With Gradinata Nord singing all 90 minutes the last whistle of referee Tagliavento was the best moment of this season! Mr. Preziosi now has a lot of work to do to construct a team that can play in the left side of the standings.