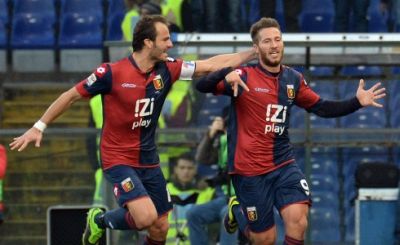 Last week Sau of Cagliari scored the deciding goal against the 10 players of Genoa in the last minute of injurytime. This time in Marassi it was De Luca of Atalanta who scored the equalizer (1-1) in the 93rd minute. Honestly Atalanta deserved the draw, but it is always very nice if you win a match without earning it. The goal of Genoa was scored by Andrea Bertolacci halfway the second half. Genoa missed defenders Portanova (injured) and Manfredini (banned after his red card last week) and midfieldplayers Vrsaljko and Kucka (both injured, Kucka for 4 till 6 months). Next week Genoa plays the last match of 2013 in Bologna. Manfredini and Vrsaljko can both play in the city of the two towers, Portanova is doubtful to play against his former team. Let’s hope this match stops in the 90th minute without injury-time and we can celebrate our 500th victory in Serie A.