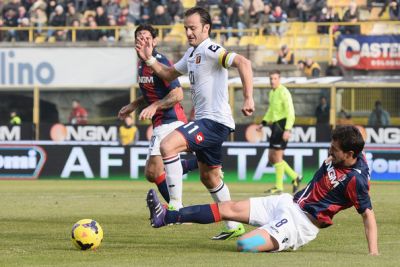 As we already saw in the late goals of Cagliari and Atalanta in injury-time and the many players with cramp the last matches, our team is tired. After Liverani was substituted by Gasperini the team had to train very hard to reach the right physical level. Now the players are tired and they want a little vacation. Trainer Pioli had to win with Bologna to reach Christmas as coach of Bologna. Genoa missed Kucka and Portanova who were substituted by Konaté ad Gamberini. The typical 0-0 match was decided by the best player in the field: captain Diamanti. With a very hard shot he beat Mattia Perin in the 57th minute; 1-0. After the goal Bologna  did not want to play anymore and Genoa couldn’t. Gilardino was injured on his shoulder after one of the crazy fouls of Perez and was substituted by Calaio. The only shot on the goal of Bologna was made by Vrsaljko. With this bad match 2013 ends on the 9th position in the standings, 6 points above the relegationarea. The next match is 6th January against Sassuolo, 3 points are necessary!