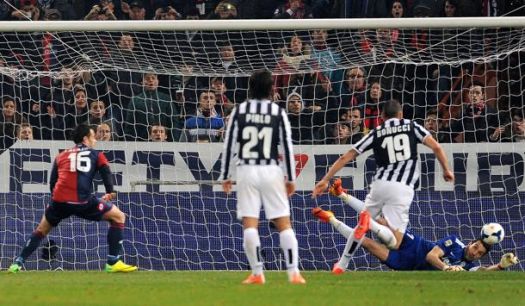 Buffon stops the penalty of  Calaiò

Maybe this was the best match of Genoa so far this season. If Calaiò would have scored the penalty we probably had beaten the Gobbi. Genoa played very agressive with Antonelli, Bertolacci, Burdisso, Matuzalem and Sculli back in the line-up in a 3-5-2 system with a very strong midfield. In the first half 2 goals of Juventus were annulated because of off-side, the first one regulary but the 2nd not. On the other hand Genoa deserved a penalty when Lichtsteiner blocked Bertolacci, but referee Mazzoleni did not react, halftime 0-0. In the 2nd half Genoa was the best team in the field. Mattia Perin was unemployed for a very long period and in the 72nd minute Genoa got a penalty after a handball of Vidal who was lucky that Mazzoleni did not give him his second yellow card. Unfortunately our penaltyscorer Gilardino was substituted 8 minutes before, so his substitute Emanuele Calaiò took the penalty. The shot was too soft and not far in the corner of the goal, so it could be easily stopped by Buffon. In the 89th minute Mazzoleni whistled irregularly for a free-kick against Sturaro just outside the penaltyarea of Genoa. Specialist Andrea Pirlo shot the free-kick high in the 7 of the goal without giving Perin any chance. Genoa-Juve 0-1, sometimes football is so unfair! 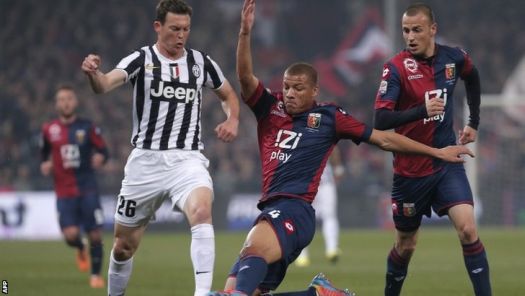