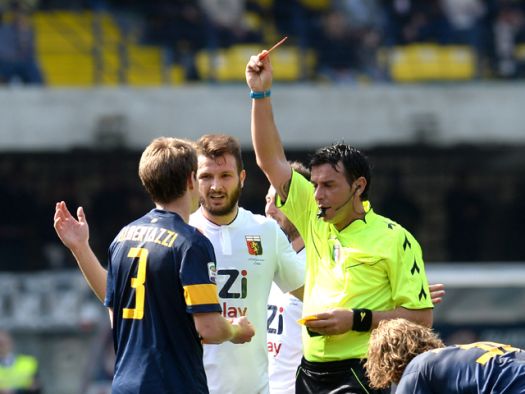 After the last good matches against Juventus, Parma and Lazio we again had to visit Stadio Bentegodi. The match against Chievo in the same stadium was one of the most bad of Genoa this season, now we had to play against the best team of Verona this season: Hellas. The yellowblue played a very good first half of the season, but the last months they go down in the standings. Till the 44th minute both teams were equal and the score was 1-0  by a goal of Donadel in the 34th minute. In the 44th minute Verona-defender Albertazzi got his second yellow card because of a foul against Sculli and had to leave the pitch. In the 2nd half Gasperini brought Calaiò, Fetfatzidis and Konaté in the team while defender De Maio ws also send to the central-forward position. With 7 strikers (!) and the ball all time on the half of Verona we did not create one good chance to score because the penaltyarea of Verona was every time too crowded. In the 87th minute Genoa lost the ball in midfield and Iturbe and Toni could run together towards Mattia Perin and good-old Toni scored. Three minutes later the same thing happened against the total disorganized Genoa-team: 3-0, again by Luca Toni.  An unnecessary defeat with 11 against 10. Next Monday we play at home against A.C. Milan.