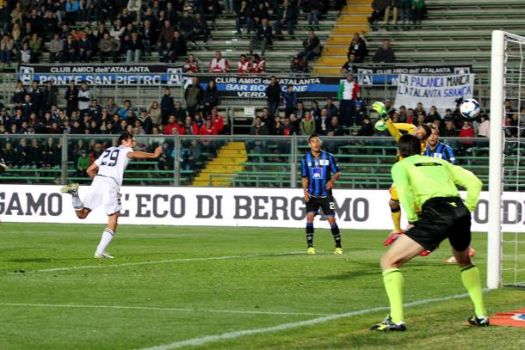 With a 1-1 draw in Bergamo the Gasp-boys now have 40 points in the standings. Number 18 in the standings Bologna has 28 points, so with 3 matches to play our team is 100% sure of playing next season for the 8th time in a row in Serie A. A record for our club since the 2nd World War. After first a shot of Bertolacci against the post 14 minutes later Genoa probably scored the best goal of the season. After a great combination of Fetfatzidis and Gilardino the ball went to Antonelli who gave a perfect cross back towards De Ceglie and his header was in the far corner: 0-1. At the beginning of the 2nd half Portanova was send away with a very dubious red car after a foul (?) against Denis who also got a penalty that was stopped by Mattia Perin. As often the last time we took a goal in the last minutes. This time it was De Luca who scored, but clearly in an off-side position. Everybody saw it, except referee Peruzzo and his linesman.