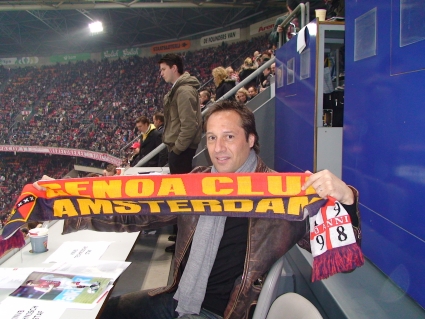 Today I had a quick chat with the assistent coach of Holland and from 1st July the assistent coach of Ajax: our member of honour mister Johnny van ‘t Schip. We talked about revelation Borriello and of course he wanted to show our special Genoa Club Amsterdam shawl in front of the camera. Thanks Johnny! DJ Pure de Mele.

Today we’ve changed the content on the Genoa Club Amsterdam TV Channel. Now you can watch the highlights of all our Serie A games in a row. At your service.

Genoa deserved at least a draw in the home of Torino, but unfortunately one action of the arrogant couple Nedved-Del Piero decided the match. In the offensive way Genoa did not had enough power to beat Gigi Buffon, the only real star with good manners in the team of the Old Lady. Frustated Pavel Nedved got his almost usual last-minute red card against Genoa after he tried within the last 60 seconds of the match to break both legs of Milanetto and the backside of Konko.

At your service: the weekly highlights of Genoa’s-match
[youtube IbPeLeT6ZB0]

As we promised: the You Tube clip of Genoa-Cagliari (2-0). Posted on the internet by a Dutch Cagliari-fan… We’re living in a small world.

A sms from our President Hans Otten and his ‘adjudant’ Bart in Genova: “Because of the 2-0 and the fifth place in the Serie A; it’s a big party down here.” Well Hans, we’re also partying in Amsterdam at the moment! UEFA-cup here we come 🙂 As soon as possible i’m posting the best You Tube clip of the match against Calgiari.  Forza Genoa! DJ Pure de Mele.

See how Genoa won in Napoli. Most of the time we prefer a draw against our friends, but a ranking above Milan and the Ciclisti feels good after all those years.

Ah! Webmaster DJ Pure de Mele was the last days only looking at the widget right with the standings. So he forgot to post the You Tube-clip. But here it is: our first victory this season. It’s feels good, right above the ciclisti.

Again, we found the best You Tube match-clip around. No goals but a good impression of the game. Enjoy!

For people abroad and the die-hard fans: the match from sunday found on You Tube.