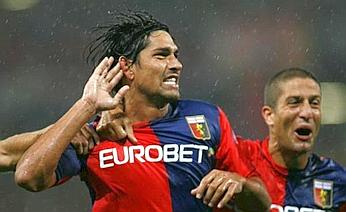 Tonight Genoa booked the first victory in Serie A: 3-2 against Udinese in a very, very attractive match. Genoa-striker Marco Borriello scored all 3 red and blue goals. In the 20th minute Marco scored his first one. Directly after halftime Borriello scored his second goal with his head, but the happiness lasted only a few minutes because Rubinho got a false red card. Our goalkeeper touched the ball with his hands inside the penalty-area and not outside like referee Ciampi decided. To make it even more worse Asamoah scored the 2-1 only 2 minutes later. With 10 against 11 of course Genoa lost control of the match and substitute goalkeeper Scarpi had to make many saves. In the 73rd minute Borriello was softly touched by defender Zapata inside the penalty-area but to correct his error with Rubinho now referee Ciampi gave Genoa a penalty that Borriello scored. Only 4 minutes later Mesto made it 3-2 with a shot that was half blocked by Gaetano de Rosa. The last sixteen minutes lasted hours, but after the final whistle of the referee the party started. Genoa is now together with European champion A.C. Milan on the shared 9th position in the tables, just outside the Uefa-cup zone.