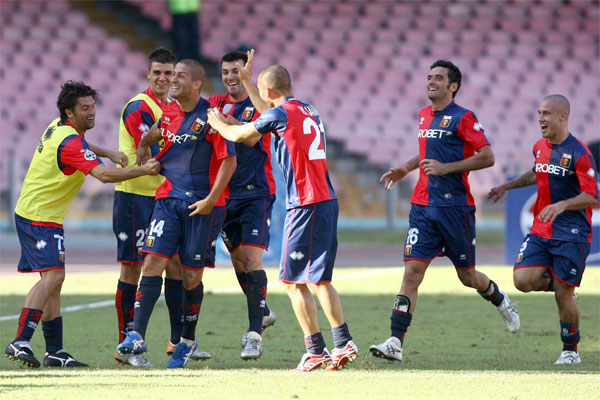 Especially in the season of Serse Cosmi Genoa often lost points in the last minutes of the game. One of the main reasons in the past was the fever to loose points, so many times the team played the dying minutes of the game in a defensive way. Now with Mr. Gasperini Genoa always tries to play offensive and like the best Dutch player of all times Johan Cruijff always says: to attack is the best defense. As long as you have the ball, the opponent can’t score.

Today to be honest Genoa also was lucky. In the twelveth minute Leon gave a good cross and before Borriello could shoot, Cannavaro already shoot the bal in his own goal: 0-1. In the second half Napoli got their almost usual penalty in homematches. Domizzi scored the penalty behind Alessio Scarpi. After the equalizer it was mostly Napoli that was close to the winning goal, but if possible Genoa also tried to win the match. In the 89th minute Borriello gave a perfect cross just on the head of substitute Giuseppe Sculli: 1-2.

Now Genoa is on the 9th position in the standings, which is fantastic, but not the most important fact of this weekend. Most specially was the warm welcome and the applause by Napoli-fans the Genoa-team got at the arrival at the airport and by entering their hotel and the stadium. Genoa and Napoli: friends forever !!