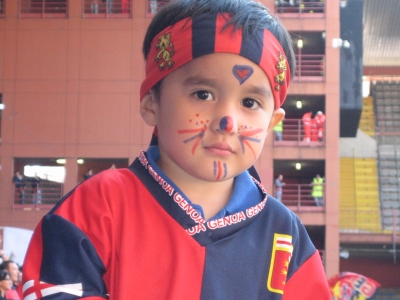 Sunday afternoon: Genoa – Cagliari, almost 10 years after the foundation of our fanclub the first match to visit in Serie A. It also was the return in Gradinata Sud, this time as seasonticket-holder of Genoa and not as visiting supporter of Ajax. As we already had seen on the closed training saturday: Genoa played with Konko in defence and Marco Rossi on midfield. Also this time Mr. Gasperini found the perfect tactical-system to control the match. Cagliari hardly never reached goalkeeper Rubinho of Genoa, while goalkeeper Fortin on the other side was very bussy to try to keep the zero on the scoreboard. In the first half the Sardinian goalkeeper succeeded, but in the second half in front of Gradinata Sud he was without any chance at the fantastic goals of Borriello (his fifth this season!) and Marco di Vaio. Now Genoa is back in the same position as during our last visit of Gradinata Sud on 1st April 1992: zone Uefa-cup, only at that time this young supporter wasn’t born yet.