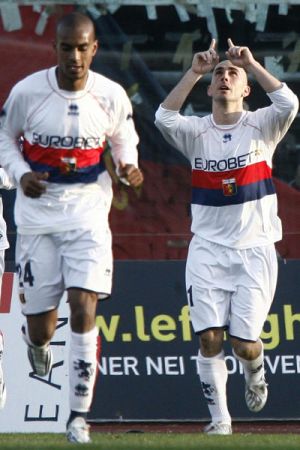 This afternoon Marco di Vaio saved Genoa in the 83rd minute by scoring the equalizer at the moment we played only with 10 players after the red card of Santos. In the first half Genoa was the best team in the field, but in the 15th minute at the only moment Livorno went forwards Tavano scored: 1-0. Already after 28 minutes Mr. Gasperini brought De Vaio in the team and in the second half also Sculli and Figueroa, raising the number of strikers in 4. Genoa also in the second half was the best team in the field, but after Santos got his second yellow card in the 75th minute we all were frightend that Genoa would return to Liguria without points. Genoa is now on the 9th position in the standings with 29 points.