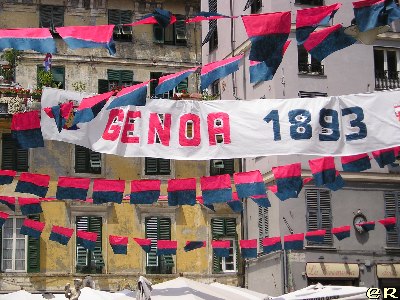 Our supportersclub is founded on Tuesday 15th June 1998, today exactly 10 years ago. That day we went to the office of Genoa in Via Roma to ask permission to start an official Genoa supportersclub in Holland. Mr. Gianni Blondet gaves us permission (and a videotape with the history of Genoa) and our club was born. Now 10 years later we have 50 members and an internetsite with over 20.000 visits by 10.500 visitors in 10 months.

Yesterday the 5th new arrival was bought by Mr. Preziosi. After Modesto, Di Gennaro, Gasbarroni and Potenza this time 23 years old France striker Abdelkader Ghezzal arrived from Crotone, the former club of Mr. Gasperini. After 18 goals with Pro Sesto in Serie C-1 in the season 2006-2007, last season Ghezzal scored 20 times with Crotone. The young striker is 1.83 high and played in the youth of Olympic Lyon.