At Wednesday 13th August in the yearly match to remember the killed Genoa-supporter Vincenzo Claudio Spagnolo the team of Mr. Gasperini plays against the Dutch team AZ Alkmaar. The team of the Cheese-city 40 kilometers Northwest of Amsterdam is in the hands of the famous ex-coach of Ajax and Barcelona: Louis van Gaal. 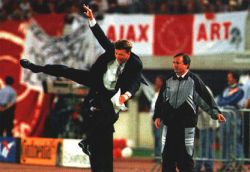 Also the 2 assistent coaches were succesful with Ajax in the 90’s: Patrick Kluivert (only goalscorer in the Champions League final against Milan in 1995, 4 months after the killing of Spagnolo) and Shota Arveladze. AZ Alkmaar has a very young talented team that was close to the Dutch title in the years 2005-2006 + 2006-2007. Last year the club was not so succesful with the 11th position in the standings. The team always tries to play attractive and offensive football and has 3 famous players: Demy de Zeeuw (Dutch international), Graziano Pellè and Moussa Dembélé.