Just as last year Genoa has lost the first match of the season. After 0-3 last season against Milan, this time 1-0 in Sicily against Catania. The goal was scored in the 63rd minute by Giuseppe Mascara who played with Genoa in the season 2002-2003. Also in the season 2004-2005 in Serie B Mascara scored an important goal against us in the last minute of the match Perugia-Genoa: 2-2. 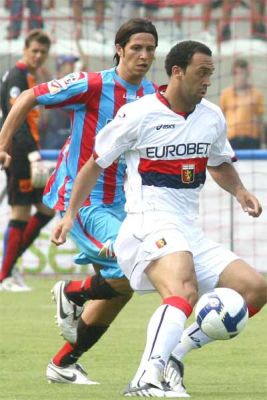 Genoa started with Anthony Vanden Borre and Juric as central midfielders, assisted by Marco Rossi (right) and Francesco Modesto (left). In the first 15 minutes Catania started, as expected, very agressive but after this period Genoa controlled the match and had some little chances to score in the oven of Catania. In the best part of the match of Genoa the goal of Giuseppe Mascara was scored. Of course Genoa did everything to score the equalizer, but we did not succeed.