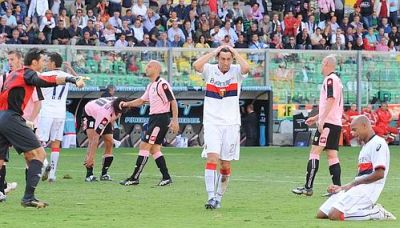 Again Genoa lost at Sicily and again the deciding goal was made by an ex-player, this time Cesare Bovo who returned to Palermo this summer after he was hired to Genoa last season. To be honoust: Palermo deserved the victory, but with a ball on the crossbar of Milito (who also scored the goal of Genoa in the 89th minute) and a failed big opportunity of Olivera in extra-time we could draw.

As expected Mr. Gasperini started with Raffaele Palladino in the line-up, but he did not play as good as Gasbarroni last week. But Raffaele surely was not the only one who could not repeat the level of the match against Milan. While Palermo was the best team in the field it was Diego Milito who hit the crossbar with a fantastic shot in the 33rd minute. Six minutes later Cavani scored the opening-goal: 1-0. In the 59th minute ex-player Cesare Bovo doubled the score with a great shot of 30 meters. Just before the end of the regular playtime Milito scored the 1-2 after a cross of Modesto. While Genoa did not really deserve it, in the extra-time Ruben Olivera missed a great chance to score the equalizer. 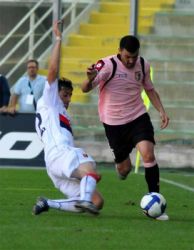