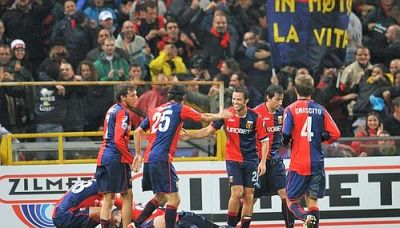 With Andrea Gasbarroni in the line-up as substitute of banned Ivan Juric the Gasperini-boys started agressive. In the 25th minute after a corner Mesto brought the ball again in the penaltyarea and by the 2nd post Sokratis scored his second goal of the season. After 10 minutes in the second half Thiago Motta scored his first Italian goal out of a very difficult position besides the goal. We all hope the match was over now, but Cagliari did not want to give up and went stronger and stronger. In the 66th minute Bianco scored the 2-1 out of a freekick and it was clear that Genoa still was tired of the match with 10 against 11 in Giuseppe Meazza. But luckily we have Diego Milito that passed the ball after a corner of Cagliari besides Fini who kicked him and got his 2nd yellow, so red card. With 11 against 10 we saved the 2-1 score and did win also our 5th homematch.