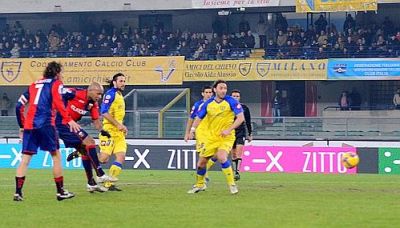 Sometimes you don’t win while you deserve it, like last week against Atalanta. Another time you don’t deserve it but you win a match. Today Genoa did win the last match of the fantastic year 2008 by a goal of Ruben Olivera in the 89th minute, but we did not deserve it. Despite the fact that Chievo Verona hit two times the post it was a really 0-0 match between number last Chievo Verona and the very handicaped team of Mr. Gasperini who missed 7 line-up players (Ferrari, Mesto, Milanetto, Gasbarroni, Sculli, Milito and Palladino) and let El Shaarawy (16 years) and Brivio make their debut today. With this victory Genoa ends 2008 on the 6th Uefa-cup position in the standings with 29 points in 17 matches, 10 more than last year after 17 games.