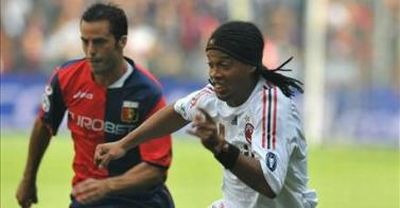 The big match of the 21st playround of Serie A tomorrow is between nr. 3 A.C. Milan and nr. 4 Genoa. The difference between the 2 teams is only 4 points and 2 goals. The first match this season between the 2 teams ended in a victory of Genoa by 2-0 with goals of Sculli and Milito. Since this match Milan played 9 homematches and did win them all, while Genoa took the last 3 away-matches the 3 points home.

Genoa misses probably only 3 players tomorrow in San Siro: the long time injured Matteo Paro + Andrea Gasbarroni and the 1 match banned Matteo Ferrari because of his red card against Catania. The Gasperini-boys also miss the support of the Genoa-fans, who are not welcome in San Siro because of the problems between the fans of both teams since the killing of Genoa-supporter Claudio Spagnolo by Milan-fans in 1995.