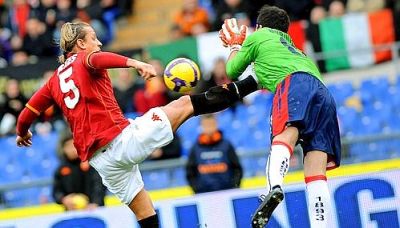 For the first time since 13th November (Juventus-Genoa 4-1) we lost a match. Again the result does not tell the whole truth. It has to be etmitted that Roma scored 3 fantastic goals, but the stars of Rome also got some help of referee Rocchi. Especially the yellow card of Biava and the red cards of both Sculli and trainer Gasperini (all against Totti) were ridiculous because all the times there was hardly a fall. Francesco Totti is a very good actor and referee Rocchi seems to be his biggest fan.

Honestly Roma scored 2 great  goals and was the best team in the field till the regular red card of Taddei. From that moment Genoa was the best team in the field, but Mexes (big foul against Rubinho without a card) and Rocchi (red card of Sculli) took away the advantage of Genoa. In the 93rd minute Baptista scored 3-0, but this goal was only for statistics. The real match ended in the 69th minute with the incredible red card of Sculli. Genoa now is 5th in the standings, but next Sunday we play in Luigi Ferraris against number 4 Fiorentina that beat Lazio today in the last minute and is 1 point ahead of us. 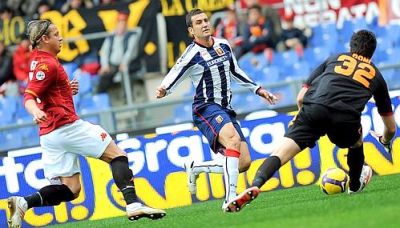