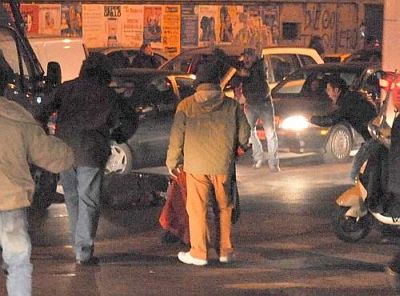 Immediately after the last whistle of referee Rizzoli a few seconds after the equalizer of Mutu (3-3) all Genoani protested furiously. The players in the field, but also the supporters everywhere in the stadium. After the dubious decisions of referee Rocchi last week in Rome now it was too much. Again Genoa got a very dubious (and early) red card, because the second yellow card of Biava was given very easily by Rizzoli who refused to give Fiorentina-player Jovetic his second yellow card later in the match. Also the penalty of Fiorentina was dubious and the goal 2 seconds before the end was regular but very painfull to the 10 Genoani that played a fantastic match and deserved the 3 points.

Two hours after the match the Fiorentina-coach finally got permission of the police to leave Luigi Ferraris Stadium after Genoa’s president Enrico Preziosi himself had send home most of the Genoa-supporters that wanted to wait till referee Rizzoli would show up. The playerscoach of Fiorentina was the first object that showed up after 2 hours of waiting and the 150 supporters reacted furiously, but of course couldn’t do anything else than touching the coach with their hands. Also Gabriele Amato touched the coach with his hands but dramaticly he came under the wheel of the playerscoach. Now 29 hours later Gabriele’s life is still in danger. A horrible end of a fantastic match that should stop 5 seconds earlier. Hold on Gabriele, keep strong !!