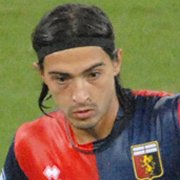 Exactly 1 year and 4 days after his injury started in the match Genoa-Napoli, Matteo Paro today returned at the Gianluca Signorini trainingfield in Pegli. After the 2 operations Matteo trained several months in Chiavari, but now the last part of his comeback has to be realized at Genoa’s trainingfield. Maybe Matteo can play some matches at the end of the season, which seemed completely over for him. Welcome back Matteo !

In the meanwhile Genoa already sold over 5.000 tickets to the match Saturday at 18.00 hours against Inter. Probably the match will be totally sold out, because everybody wants to see if Genoa after Milan and Roma also can beat Inter in Luigi Ferraris. Yes we can !