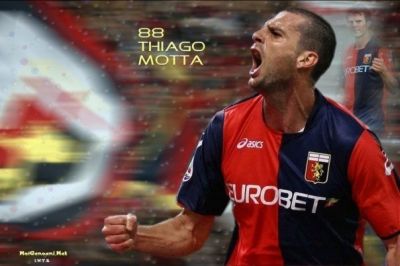 Our Brasilian central midfieldplayer Thiago Motta is healthy again and can play next week against Reggina. This week the agent of Thiago Motta told the press that our playmaker wants to play with A.S. Roma in the future. Our president Enrico Preziosi reacted furiously because Thiago Motta just 6 months ago signed a 4 years contract with Genoa after many clubs refused to give him a contract because of his fysical problems. Preziosi took the risk and he is te winner, but of course does not want to lose such an important player after only 1 season. The next day Thiago Motta, his agent and A.S. Roma said sorry to Preziosi, while our Brasilian player also said that he wants to stay with Genoa.

This weekend 5 Genoani play with their National Team to reach the World-Cup in South-Africa next year. Diego Milito plays with Argentina against Venezuela (and Wednesday in La Paz, Boliva on top of the world), Bosko Jankovic plays with Servia in and against Romania, Sokratis Papastathopoulos defends Greece in Israel, Ivan Juric plays Wednesday with Croatia in Andorra and our talented defender Salvatore Bocchetti (who refused this week to play with Juventus next year) is selected for the first time in the Squadra Azzuri to play today in Montenegro and Wednesday at home against Ireland.