A few minutes ago our president Mr. Enrico Preziosi admitted on televison that Inter bought Diego Milito and Thiago Milito, probably our best 2 players of this season. Genoa gets a lot of money (€ 16 million ?) and some players of Inter (Aquafresca, Crespo and Arnautovic ??) in return, but the players first have to sign the contract with Genoa before Mr. Preziosi can publish their names. Of course it is sad that our best 2 players leave Genoa, but last year we also lost our 2 best players with Borriello and Konko and this year we only became stronger … and our most important “player” Gasperini stays. 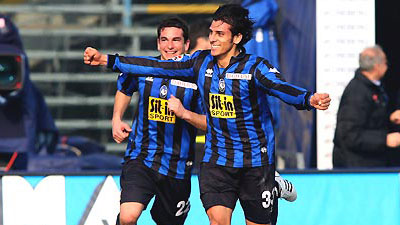 Mr. Preziosi also brought the news that Genoa already bought (€ 11 million) striker Sergio Floccari of Atalanta, who scored 12 times so far this season. The 27 years old striker already played 9 matches with Genoa in the season 2002-2003 (Serie B) in which he scored 1 goal against Catania. One thing is sure, Mr. Preziosi promised us an even stronger team than this season and the last years prove that we can trust him !