Only 72 hours after the match against Odense our red and blue team again booked a victory: 3-2 against A.S. Roma. Mr. Gasperini changed his line-up at 5 positions: Bocchetti (injured), Milanetto, Criscito, Palacio and Figueroa were substituted by Sokratis, Zapater, Modesto, Rossi and Crespo. In the first half Genoa was for sure the best team in the field but we did not create many chances, while Roma only had 1 big chance of Totti that was fantasticly saved by Amelia. At halftime our coach substituted Mesto and Modesto by Palacio and Criscito, who scored the first goal of the season after only 4 minutes when he shot the ball with his right (!) foot in the far corner: 1-0. The happiness lasted only 15 minutes in which Taddei (header) and Totti (luckily touched a shot of Guberti) changed the score into 1-2. But Genoa with the help of the fantastic fans in the stadium did not gave up. In the 69th minute Juric was stopped irregulary by Andreolli just outside the penalty-area. Our new Spanish central midfielder Alberto Zapater shot the free-kick directly high in the left corner of the goal: 2-2. 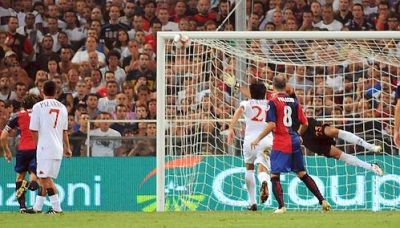 The last 15 minutes both teams tried to win the match, but Genoa surely was the strongest. In the 83rd minute the reward arrived when Giuseppe Biava scored the 3rd and last goal behind goalkeeper Artur of Roma, who first stopped the shot of Sculli: 3-2.