After the victory against Milan the misson was already accomplished, but Genoa also wanted to stay at the 8th position in the standings to be qualified to the 1/8 finals of the Coppa Italia and avoid playing at Ferragosto (15th August) in the 3rd round of the Italian cup. On the other hand: our topscorer Rodrigo Palacio (7 goals) already got permission to return in Argentina and Mr. Gasperini did not protest against his squalification of 2 matches instead of the usual 1 match.

The match was decided in 3 minutes. In the 18th minute Robert Acquafresca could not beat goalkeeper Campagnolo at their eye to eye confrontation, 1 minute later Ivan Juric got his second yellow card and had to leave to pitch, while again 1 minute later Maxi Lopez scored the only goal. Because Parma beat Livorno by 4-1 the yellowblue ended 8th in the standings and we are nineth. 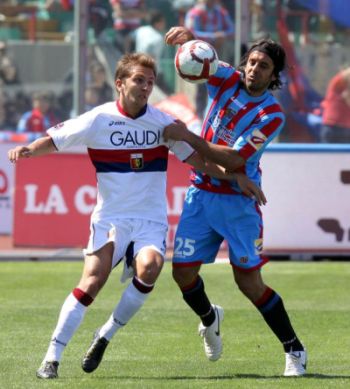