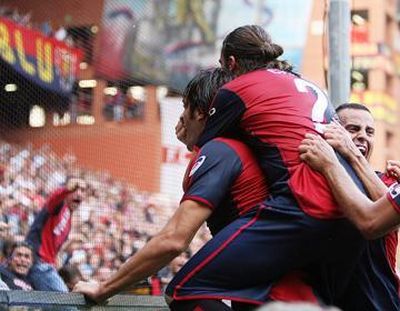 Genoa played very good matches against Fiorentina and A.C. Milan and deserved at least 4 points in these 2 matches, but we got only 1 point. Against Bari it again looked like we were very unlucky when just after halftime Moretti was send away by the referee and Bari scored the very dubious penalty: 1-1 (openinggoal in the first half by Palacio).

Also with 10 against 11 Genoa kept attacking and the deserved bonus arrived at the 95th minute: Luca Toni headed the ball behind goalkeeper Gillet of Bari: 2-1. Genoa is now back at the left side of the standings where we belong!