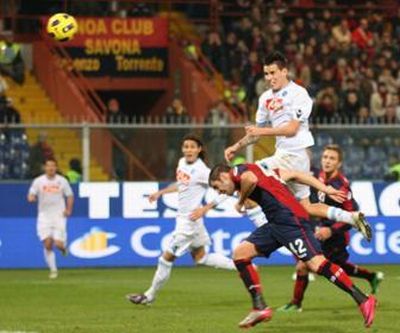 Of course it is never good to lose a match in your own stadium, but if you have to it is better to give the points to your friends than your rivals. Saturday Genoa played in Luigi Ferraris against Napoli, which is a very strong team this season. Mr. Ballardini started with 5 midfieldplayers including 3 playmakers: Veloso, Kharja and Milanetto. Our topscorer Luca Toni was assisted by Palladino. In the first half Napoli was the best team and in the 25th minute Hamsik headed the openinggoal behind Rubinho: 0-1. In the second half Genoa played a lot better with Mesto and Rudolf instead of Veloso and Palladino in the team. Our team created some chances (Mesto, Destro) and deserved at least 1 penalty (hands of Maggio), but goalkeeper De Sanctis kept his goal clean: 0-1. Now we all count the days till the next match: Sunday 19th December 20.45 hours …. the derby !!