This afternoon our President Mr. Enrico Preziosi gave an emotional press-conference. He admitted that he made some mistakes with the transfers last summer (Toni, Zuculini, Eduardo), but the critics of the journalists and a little part of the fans of Genoa against him and his family are too heavy at the moment. If things don’t turn into a normal situation Preziosi threathed that he will sell Genoa at the end of this season.

At the end of the conference Preziosi officialized the departure of Giuseppe (Beppe) Sculli towards Lazio today. Our striker is immediately substituted by Antonio Floro Flores (Udinese) who already trained with Genoa this afternoon. Next Thursday also our ex-midfieldplayer Abdoulay Konko returns from Sevillia to Genoa. In the summer of 2008 Konko was sold for € 9 million to Sevillia, now after 2 1/2 years he returns with Genoa and Preziosi has to pay only € 6 million back now. Another financially good deal! 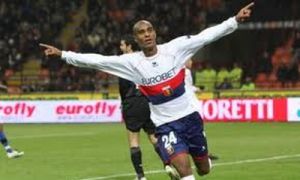