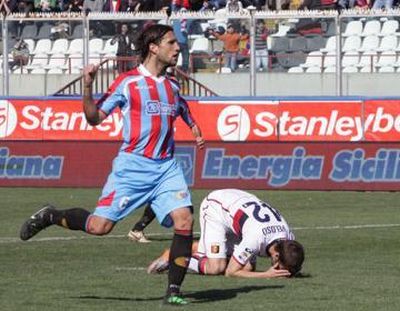 Genoa played a fantastic first half on the island Sicily. The score was only 0-1 by a goal of Floro Flores, while Marco Rossi hit the crossbar. Referee Giannoccaro also refused to give Genoa at least 1 penalty. After the halftime-break everything was different. Genoa played bad, Catania scored twice inbetween 4 minutes (51st en 55th) and Genoa received 3 red cards (Criscito, Floro Flores and coach Ballardini) within 3 minutes. This was also too much to referee Giannoccaro who gave Genoa a penalty to score the equalizer, but Veloso missed. Genoa stays on the 10th position in the standings, but the possiblity of qualification to European football is almost over.