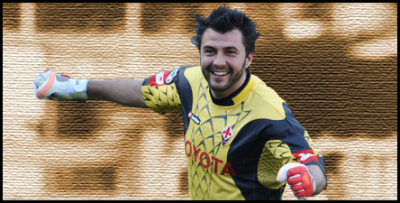 Since the end of last season, especially after the derby, the rumors about the end of Eduardo as goalkeeper of Genoa went on and on. Since Eduardo was rent to Benfica we had to wait for our new goalkeeper. Mr. Malesani wanted Emiliano Viviano his goalkeeper with Bologna last season and the substitute of Buffon in the Italian National team. Unfortunately last weekend Viviano was injured very badly (recovering-time around 5 months) which meant that Genoa had to look for another goalkeeper. Today Mr. Preziosi gave us a new goalkeeper: the very experienced 31 years old French goalkeeper of Fiorentina: Sebastien Frey. About this goalkeeper nobody has any doubts and he played for years with our central defender Dario Dainelli.