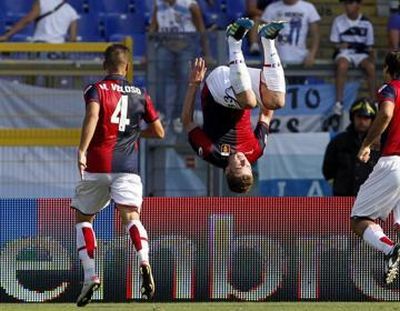 After the draw against Atalanta Mr. Malesani promised that Genoa would play better against Lazio. Now we can say he was right, unless the fact that Genoa was already 1-0 down by our ex-player Giuseppe Sculli  after only 10 minutes. In the first half both teams did not score anymore, but it was already clear that we saw another Genoa than a week earlier against Atalanta. The only negative aspect was the injury of captain Mesto after 22 minutes which meant the Serie A debut of Granqvist. At the beginning of the second half Mr. Malesani substituted Constant by Jorquera and he immediately showed his technical capacities. In the 54th minute he dribbled around several Lazio-players and gave a perfect assist to Rodrigo Palacio who scored the equalizer: 1-1. Sixteen minutes later it was Juraj Kucka after a combination with Palacio who scored his first goal in Italy: 1-2. This score was also on the scoreboard after the last whistle of the referee and gives Genoa 4 points after 2 matches.