After a disappointing first half with only a few emotions it was Rodrigo Palacio who opened the match with his 4th goal of the season after 3 minutes in the second half. From that moment Genoa was the strongest team in the field till referee Russo decided to give Chievo a penalty and Dainelli a red card. Our goalkeeper Sabastien Frey stopped the penalty by Pellissier, but Mr. Malesani substituted our best and most quick player Rodrigo Palacio (back in the Argentinian National team) by Granqvist which meant that Genoa no longer had any dangerous forwards and allmost all Chievo-players could play offensively. By goals of Pellissier in the 74th minute and Moscardelli in the 93rd minute (30 seconds before the end) the first defeat of Genoa in the season was a fact and we are now 3rd in the standings. Next week we play in Stadio Ennio Tardini against Parma. 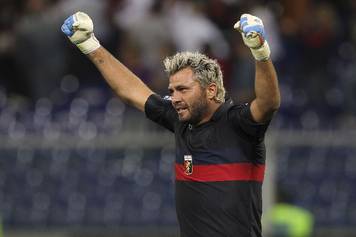