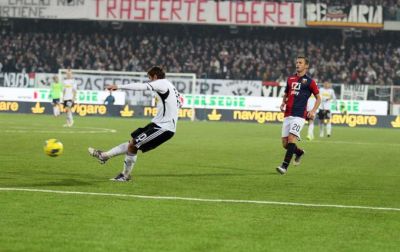 Of course Genoa was the best team in the field and of course we had a ball possession far over 50%, but our red and blue players had again big problems to create chances to score. In the first half only Palacio and Merkel were close to score a goal and we have to be afraid that players like Pratto and Caracciolo are just good headers but technically and especially physicly not good enough to play in Serie A. All Genoa-supporters are looking forward to the debut of Zé Eduardo and the tranfermarket in January, because we now only have 1 real striker: Rodrigo Palacio who gets more frustated every week and booked his 4th yellow card against Cesena, so we have to miss him Friday against Milan. In the second half Moretti made a stupid foul against Bogdani and the penalty was realized by Adrian Mutu, who also scored the fantastic second goal of Cesena. Maybe we have to buy this Romanian player in the winterbreak ?