What a fantastic match! Against nr. 3 in the standings Udinese Genoa played its best match so far this season. After the defeats against Napoli and Cagliari the team of Mr. Marino was 110% motivated to play a good match unless the missing of 5 defenders: Dainelli, Kaladze, Bovo, Moretti and Antonelli. The defense was now formed by the real defenders Mesto and Granqvist and the midfieldplayers Rossi and Constant. Genoa started good in the match and got some chances with Gilardino and Merkel, but Udinese opened the score in the 14th minute by a header of Ferronetti: 0-1. Unless a very attractive first half we had to wait for more goals after the break. After only 4 minutes in the second half Granqvist scored the equalizer being the fastest player in the rebound of the extremely hard free-kick of Jankovic that was blocked by keeper Handanovic: 1-1. 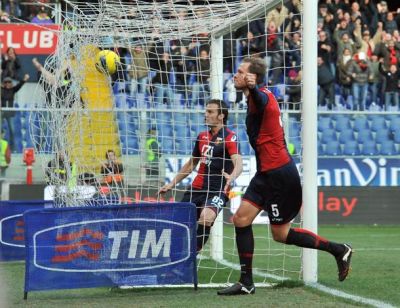 Only 1 minute later Bosko Jankovic himself scored the second goal after a perfect cross of Constant: 2-1. Genoa created more and more changes, but on the other side Udinese was a few times very dangerous but this season we have goalkeeper Sebastien Frey. In the 71st minute Palacio scored 3-1 after a cross of Gilardino. Everybody who now thought the match was over was totally wrong, because within 2 minutes referee Doveri brought the black and white of Friuli back in the match. Marco Rossi touched the ball in front of topscorer Antonio di Natala, but the referee gave Udinese a penalty and our captain a red card. Di Natale scored the penalty and Genoa had to play the last 20 minutes with 10 against eleven. Of course Udinese was the best team this last minutes, but Sebastien Frey saved us a few times and after the last whistle the stadium went completely crazy, what a match! Genoa is now 8th in the standings, but more important: back in the field with attractive, offensive and powerfull football. 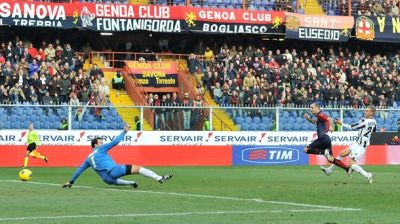