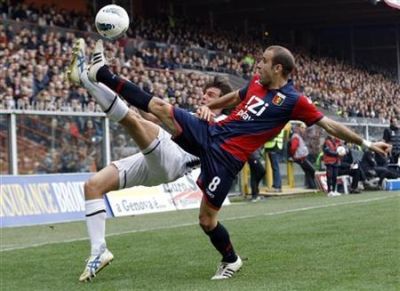 After 10 seconds the openinggoal was very close when Rodrigo Palacio almost beat goalkeeper Buffon of Juventus with a fantastic shot. In the second half Juventus hit the crossbar and twice the post, but the scoreboard still was empty. In the last minutes Genoa probably deserved a penalty when Marco Rossi was fouled in the penaltyarea, but the referee gave us a corner. To be honest: Juventus mostly deserved the 3 points, so after all we can be happy with a draw, but 1-1 or 2-2 would be a more usual score for this spectacular match. Genoa now has 33 points in 27 matches.

Next monday Genoa plays in the Olimpic Stadium of Rome at 20.45 hours. In this match we miss 6 players: the defenders Antonelli, Bovo and Granqvist and the midfieldplayers Constant, Kucka and Sculli. Maybe we now finally can see more of our technical midfieldplayers: Veloso, Belluschi and Jorquera. The last victory against A.S. Roma in the capital of Italy was in 1990, so it’s time to a new victory.