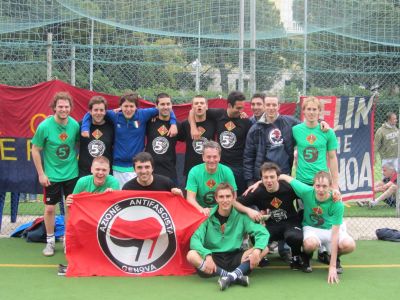 The fifth edition of United in the name of Genoa was (again) a great succes. Eigth teams (5 of Genova and 3 from Holland) played at the tennisfields of Le Palme in Genova, Albaro. The final at 18.00 hours was the same as last year Allunamanin agianst Gelateria le Stelle (Holland) and again the Italians did win the title with a 4-1 victory. After the tournament all the players went to Righi (the Dutch with the funicolare) to have a fantastic dinner with a spectacular view on the city-centre of Genova. We all thank Luca Carini for the fantastic organisation and already look forward to the 6th edition next year.