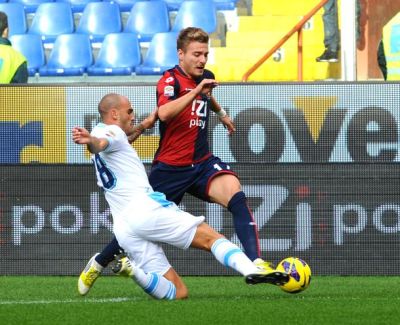 After 90 minutes the score was 2-2 between the friends of Genoa and Napoli. Unfortunately the Azzurri scored twice in injurytime. Ciro Immobile opened the score in the 24th minute and with the 1-0 advantage the first half ended. After 9 minutes in the 2nd half our ex-midfieldplayer Mesto scored the equalizer. Within 2 minutes Genoa again took the lead by Bertolacci. After this goal Napoli beame stronger which lead to the 2-2 equalizer of Cavani in the 79th minute. An honest draw, but in injurytime Hamsik and Insigne scored twice. Again a defeat for the boys of Delneri, but for the first time with the new trainer we scored twice and played good match, 1 week before the derby.