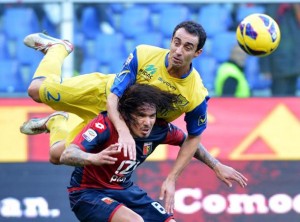 After the victory against Atalanta last week we all hoped that the crisis was over, but against Chievo it was clear that the problems are not over yet. Mr. Delneri missed Borriello and Moretti (both banned after their cards in Bergamo), while Chievo had our ex forward Alberto Paloschi in the team. After two errors of youngster Mario Sampirisi the score was 0-2 (both goals of Paloschi). In the 25th minute Delneri substituted Tozser and the new player Said scored within 15 minutes: 1-2. A good result to reach halftime and to give the team extra instructions, but in injurytime Alberto Paloschi scored again: 1-3. In the 56th minute captain Jankovic scored a great volley and after the red card of defender Andreolli of Chievo in the 71st minute the match was completely open again. False hope: in the 91st minute Stoian scored the deciding goal: 2-4. Genoa is again in the relegation area. Next match: Pescara-Genoa, so number 20 against number 18.