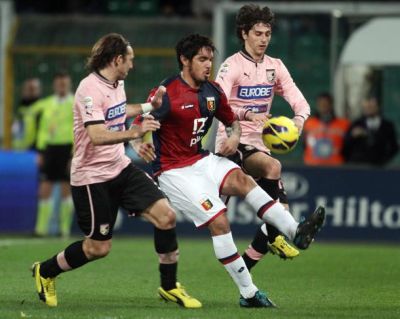 Again a draw in an away-match, which means that Ballardini is still unbeaten. The distance between Genoa and Palermo is still 6 points. The goal behind keeper Frey now is 278 minutes clean, which is a record this season. The 0-0 draw was an honest result with a big chance to  both teams: just before the halftime-whistle Marco Rossi was fouled at the moment he wanted to score the openinggoal but referee Orsato refused to give us a penalty. In the 2nd half Mauro ‘derby’ Boselli fired a great shot on our goal but Frey saved us. Genoa now has 26 points in 26 matches. Next Sunday-evening we play in Rome against Totti c.s..