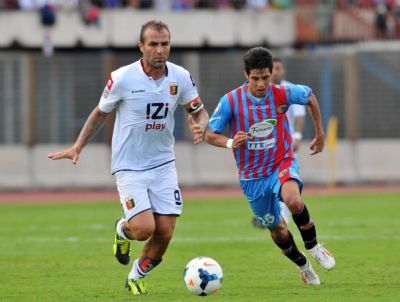 After the defeats against Udinese and Napoli which meant the end of Fabio Liverani, our “new” coach Gasperini had to start his second adventure with our Rossoblu-club in Catania. In our first year in Serie A (2007-2008) we draw 0-0 in the city of the Etna, but this draw was followed by 5 defeats in the following years (1-0, 1-0, 2-1, 4-0 and 3-2), so a hard start for Gasperson. Our very friendly coach didn’t chance a lot in the line-up, only the position of Mario Sampirisi on the left side of the midfield (usually he is a right-defender) was a surprise. In the first half Genoa was the best team in the field and several times close to the openinggoal. After halftime Catania was stronger and they opened the score by Barrientos in the 59th minute. Gasperson immediately brought Fetfatzidis, Stoian and Calaio in the team and these offensive changes succeeded. Stoian send a perfect cross towards Gilardino, but just before Alberto could head it into the goal it was Legrottaglie who did it: 1-1. A honest draw and a good start for Gasperson who now has 2 weeks till Genoa-Chievo to reconstruct the team.