Just as the last 2 seasons Genoa has beaten Lazio in Stadio Olimpico in Rome. Mr. Gasperini started the match a little more defensive comparing to the match against Parma last Wednesday. He waited till the 2nd half to bring Fetfatzidis in the team as substitute of Marchese. The Messi of Greece immediately brought more power in our offensive part. In the 60th minute he again made a slalom in midfield which ended with a perfect cross to Kucka who opened the score with his leftleg. In the 71st minute Genoa got a penalty after Ciani stopped the cross of Antonelli with his arm. Alberto Gilardino walked towards the penaltyspot, the man who missed a penalty last Wednesday against Parma. Matuzalem was afraid to watch (see foto), but this time Gila scored: 0-2. Of course Lazio tried to return in the match, but our defense was strong, just as keeper Mattia Perin. Genoa now is 8th in the standings with 14 points in 11 matches. 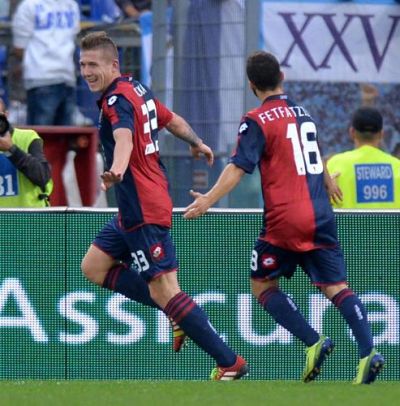