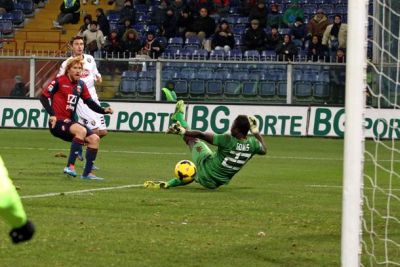 The 8th match of Mr. Gasperini wasn’t an easy one. Torino is in a very good period and beat Catania last week by 4-1. Genoa also missed defender Thomas Manfredini after his red card in San Siro. He was substituted by Giovanni Marchese. Also Ricardo Centurion got a new chance to start in the line-up. In the first half Torino was for sure the best team in the field and their advantage of 0-1 at halftime was correct, only their goal was very lucky when the back of the leg of El Kaddouri changed the shot of Farnerud in the other corner of the goal and beat Mattia Perin. In the 2nd half with Fetfatzidis in the team as substitute of Centurion the Gasperini-boys became the boss in the field. A shot of Vrsaljko was stopped by the post, but a few minutes later Biondini scored 1-1 after a nice slalom followed by a great assist of Fetfatzidis. Both teams got some changes to score the winning goal, but Perin (2 great saves) and Gomis kept their goal clean. Genoa now has 19 points in 14 matches, 15 points of Gasperini and 4 points of Liverani. Next week we play on Sundayafternoon 15.00 hours in Cagliari.