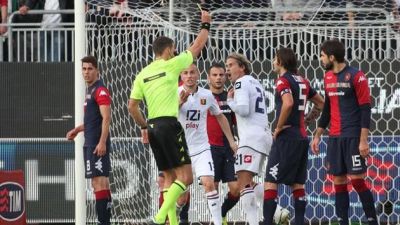 Since the comeback of Mr. Gasperini our boys only lost in Juventus-stadium. Of course we were lucky that Milan did not score the deciding goal in San Siro a few weeks ago and last week Torino was stronger than us, but it was also the power of our defense and Mattia Perin in particular that we didn’t loose these 2 matches. In Cagliari – without banned Matuzalem – Genoa scored the openinggoal: Gilardino again found the net after a great assist of Lodi. During the rest of the first half the teams were equal without great chances. Two minutes before halftime a corner to Genoa and the players of both teams pushed against each other as with every corner. Captain Conti of Cagliari seemed a little aggressive so he got a yellow card, but as a complete surprise also Manfredini who already had a yellow card earlier in the first half, so Genoa had to play the rest of the match with 10 players. In the second half also Conti deserved a second yellow card, but Giacomelli saved him and Cagliari that scored twice in the 76th and 93rd minute: 2-1. An unnecessary defeat of the match, but we also lost Juraj Kucka (4 till 6 months) and Daniele Portanova (2 till 4 weeks) with heavily injuries. A black Sunday that seemed so nice till we got a corner in the 43rd minute.