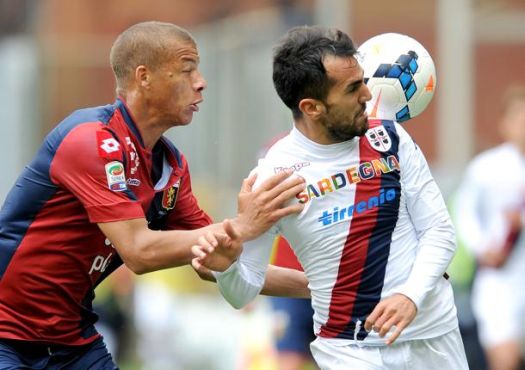 Again an unnecessary defeat for our Rossoblu-team. The match started perfectly with the opening-goal of De Maio already in the third minute of the match. Right after the goal Genoa was a few times close to the 2nd goal which probably would decide the match. A mistake of Sturaro and De Maio gave Sau the opportunity to score the equalizer in the 37th minute: 1-1 at halftime. In the 37th minute of the 2nd half another big mistake in the defense of Genoa, this time by De Maio and Burdisso, gave Sau again the chance to score but he was stopped by Mattia Perin the rebound however was scored by Ibarbo: 1-2. In the 95th minute Gilardino scored the equalizer in the last second of the match, but the goal was regulary annulated because of off-side. Again a defeat to the Gasp-boys who left the field without saying goodbye to the fans.