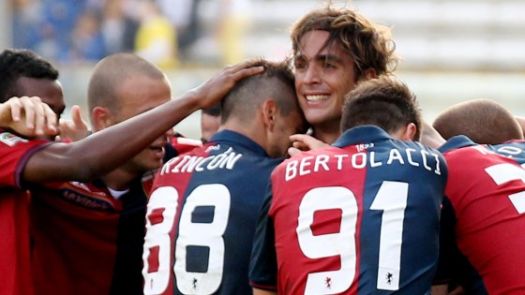 So far this transferperiod Genoa sold 3 players: Mauricio Pinilla (Atalanta), Leandro Greco (Verona) and Franco Mussis (back to Copenhagen). As substitute of playmaker Greco is hired Tino Costa of Spartak Moscow who after the match aginst Inter last Sunday now is heavily injured, so at the moment we don’t have a playmaker. As substitute of Pinilla Genoa had an agreement with Goran Pandev (Galatassary) but Pandev is coming from a country outside the European Union and despite the fact that he played for over 10 years in Italy he is not allowed to join Genoa this transferperiod. Till last Sunday not a big problem, but now Alessandro Matri is injured for 45 days, so we do not have a central forward player. Before the match next Sunday against Sassuolo Genoa has to buy at least a new central forward. The names which are in the media: Borriello, Osvaldo and Destro, but we all hope for the return of Diego Milito !