As you can see on the picture below the big stadium of Milano (San Siro or Giuseppe Meazza, capacity of 85.700) already is coloured red en blue and tomorrow-evening it will be much more. Around 4000 Genoa-fans are expected, while the Curva Nord of Inter ultras has to be empty because Inter-fans offended our Napoli-friends 3 weeks ago. 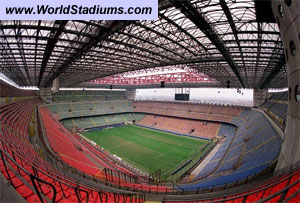 The last match in Giuseppe Meazza twelve years ago on Sunday 9th April 1995 3 ex-players of Ajax: Johnny van ‘t Schip (Genoa), Wim Jonk and Dennis Bergkamp (both Inter) were present. Also tomorrow 3 ex-players of Ajax are expected on the field, but all 3 with the wrong team: Christian Chivu, Maxwell and Zlatan Ibrahimovic.