Against Juventus and Fiorentina the team of Mr. Gasperini played very good in defense, but not powerful enough in the offensive part. Tonight it was the opposite: especially in the second half with Juric and Figueroa in the team Genoa played very good offensively, but at that moment Inter already had a 2-0 advantage after 2 errors of Rubinho. 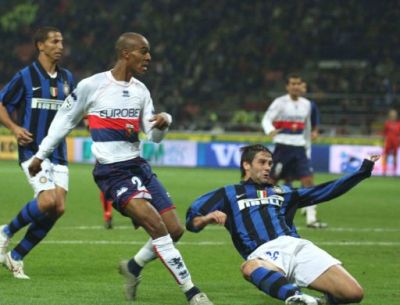 In the 73rd minute Konko scored after a combination with Figueroa the 2-1 and brought back the believe in our hearts that maybe a draw was possible in Giuseppe Meazza. But within 60 seconds Gaetano de Rosa made a big mistake and Suazo could easily score 3-1. A few minutes later Leon hit the crossbar and the hope was over. The penalty that brougth the final 4-1 on the scoreboard was only for statistics.