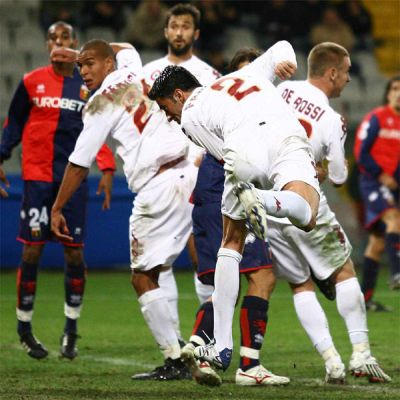 The 11 players of Mr. Gasperini played a good match against the 14 (11 + referee Rosetti and both linesmen) of Roma. Matteo Paro hit the post with a fantastic shot halfway the second half and Marco di Vaio scored a regular goal that was cancelled wrongly because of off-side. These things unfortunately can happen in football and of course also Roma had some good chances to score, but the 5 dubious yellow cards of Genoa by referee Ro(ma)setti let us all in the stadium think of the Moggi-period of last years. Maybe the fact that international (?) referee Rosetti lives in Torino, the city of the next opponent of Genoa, makes something clear. Genoa misses 3 important players next Sunday (Paro, Juric and Danilo) because they all got a very dubious yellow card.

If the boss of the referees Collina  is as honest as he was in his period of referee he should take care that international referee Rosetti doesn’t whistle a new match this year, just like any other referee that makes such big mistakes. We all fear that Rosetti won’t be punished and Genoa gets a high money-penalty because of the songs of the public against Rosetti and Lega Calcio because of the fact that they have forbidden to Genoa-fans to travel to Torino next week to see the match against our friends of Torino. Or is Lega Calcio afraid that Genoa-fans do find the house of Rosetti in Torino ?!

The highlights of the match: